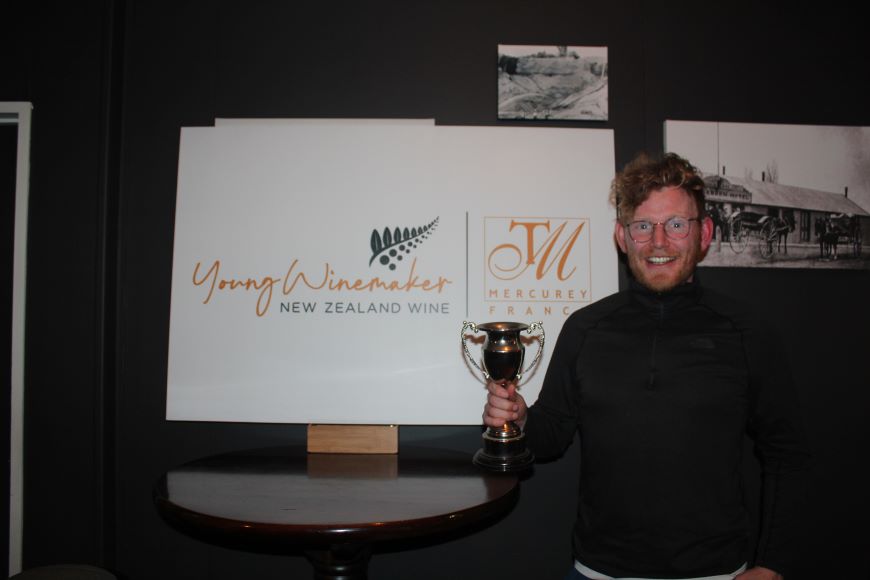 Ben was back to defend his title from last year so was thrilled to be again raising the cup.  Last year, as he was on the Burgundy Exchange, he was unable to compete in the national final, so is extra thrilled to be heading up to Hawke’s Bay in November this year to represent Central Otago.

Congratulations also goes to Jordan Moores from Felton Road who came second and to Rachel Bradley from Burn Cottage who came third.

The talented Young Winemakers were tested on many aspects involved with wine production including a fork lift challenge, laboratory tests, blending, fault finding, world wine knowledge and marketing.  The contestants also delivered some very interesting speeches on topics such as biodynamics, the effect of Covid on the NZ wine industry and the use of social media in the wine industry.

It’s a tough day but the judges thought the contestants were of a very high calibre and well on their way to enjoying a successful career in the New Zealand wine industry.

Despite having to make changes to run in Alert Level 2 and cancelling the Awards dinner there was still a really positive vibe throughout the day.  “It was great to see how much preparation the contestants had done prior to the competition.” said Nicky Grandorge, Leadership & Communities Manager at NZ Winegrowers “They all wanted to stretch themselves yet at the same time really encouraged each other, demonstrating a very ambitious and supportive young wine community in Central Otago.  It’s fantastic!”

The competition is made possible by all the generous sponsors, who are appreciated more than ever in this challenging year.  The national sponsors are Tonnellerie de Mercurey, Crown Sheet Metal, Farmlands, Guala Enclosures, Laffort, O-I Glass, Programmed Property Services, Winejobsonline and New World.

Apart from being crowned the 2020 Tonnellerie de Mercurey NZ Young Winemaker of the Year, the national winner will take home an amazing prize package which includes a travel grant to visit the cooperage (tonnellerie) in Burgundy, be an associate judge in the New World Wine Awards and review wines in DrinksBiz magazine.

The final regional competition will take place in Marlborough on 16 September.