Whilst the enormous cup won’t be coming home to sit in the trophy cabinet after the awards function this weekend, Lowburn Ferry owners Jean and Roger Gibson hope it will help them build sales and find new distribution channels across Australia. The company is teamed in the NSW market with Young and Rashleigh (recently rated the No.1 distributor in NSW/ACT in the on-Premise market by the independent group Wine Business Solutions) and has other smaller Australian partnerships, but sees this award as a stepping board to open new doors whilst enhancing the brand’s position in Australia and other export markets.

The “J F Hillebrand (New Zealand) Ltd Perpetual Trophy for Best Pinot Noir of Competition” was awarded to Lowburn Ferry’s 2014 Home Block Pinot Noir and will be available to taste at the competition’s public function at the Menzies Hotel in Sydney on Saturday. The Sydney International Wine Competition is notable as wines go through a three-phase blind judging system – where the finalists, in food-friendly style categories, are judged beside food dishes of similar palate for a Blue Gold award – with the top 5% of the 2000 entries also receiving Top 100 awards.

Lowburn Ferry has been a Blue-Gold winner with its Home Block wines each year since the 2008 vintage – and in the Top 100 (top 5%) for 5 out of those 6 vintages. Lowburn Ferry “The Ferryman” Reserve Pinot Noir 2013 also won a Blue-Gold Top 100 award at this year’s show.

Chairman of judges, Kym Milne MW said the competition involved 13 international judges from a broad range of disciplines – consisting of seven Australian judges, four New Zealanders, one American and one Swede. Amongst this group were three Masters of Wine (MW), one Master Sommelier (MS), six winemakers, a wine journalist and a wine researcher/lecturer.

Lowburn Ferry was in the spotlight last year when it was placed first in the Cuisine Magazine NZ Pinot Noir Tasting for its 2013 Home Block Pinot Noir, while Lowburn Ferry pinot noirs were also served in first class cabins on British Airways for several months last year.

Lowburn Ferry vineyard was established in 2000, nestled on a sheltered north facing terrace in the Lowburn Valley near Cromwell in Central Otago. Most of the production from Lowburn Ferry is exported, with key markets being Australia, Canada, the UK and Asia. Wines are sold direct from the winery in New Zealand, selected fine wine stores and fine dining restaurants. 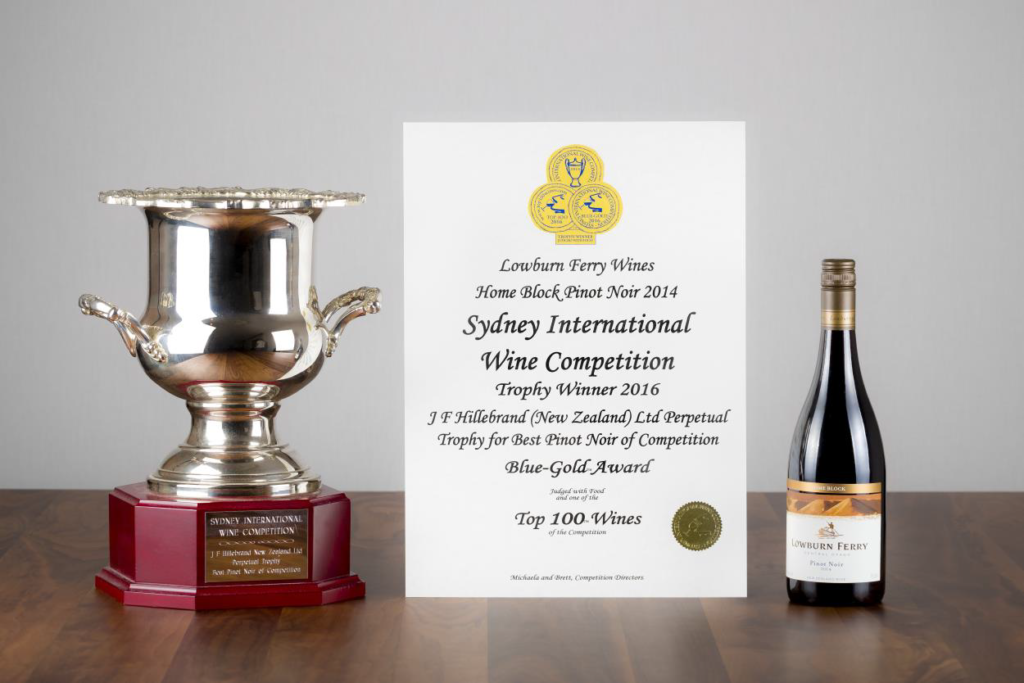 The photo was delivered by post… the trophy stays in Australia… Lowburn Ferry hopes it will boost wine sales across Australia.