In family tradition, the icon range is named in honour of ‘Arthur Edmund’, husband to ‘Elspeth’ whose name has long-adorned and signified Mills Reef’s ultra-premium range of wines.

Mills Reef co-founder and Chief Winemaker, Tim Preston, says ”Arthur Edmund, my grandfather, was a pioneer and visionary, that same spirit is likewise echoed in these special wines, hence we felt it was a fitting tribute to name them in his honour, and to accompany the fine wines named in honour of his wife and my grandmother, Elspeth“.

Of the Arthur Edmund wines, Tim says “they are the culmination of an idea and journey that’s been decades in the planning, and represent the absolute pinnacle of our grape growing and winemaking, our Mount Everest of wine”.

The two inaugural prestige wines are a 2013 Cabernet Merlot blend, and a 2013 Syrah, grown in the acclaimed Gimblett Gravels Winegrowing District of Hawke’s Bay.

Early-on the arid stony soils and warm climate of this District proved to yield extremely fine wines of world-class stature. So much so, that internationally renowned wine critic James Halliday declared in 2008 that “the 800ha Gimblett Gravels is not just a very special parcel, it is a sacred site”. 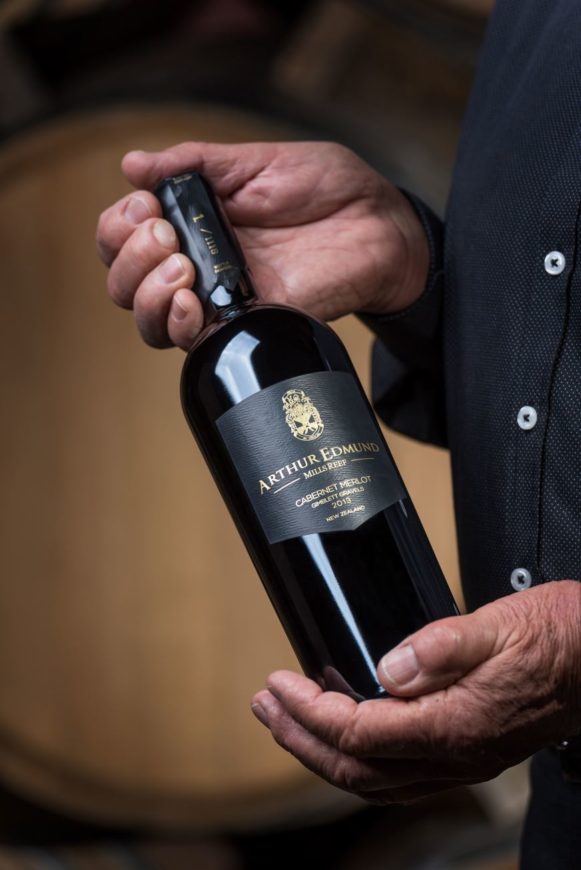 “Capturing the ultimate expression of this very special place in our Arthur Edmund wines was a natural progression”, says Tim. Following planting of the Mills Reef vineyards in the 1990’s, a patient wait ensued until the vines had attained sufficient age to yield grapes possessing the immense intensity and perfect balance sought for the prestige wines of Arthur Edmund.

A stringent criteria was adopted, selecting only the oldest vines, in the very best rows on the best soils, pruned to extremely low yields of only 3-4 bunches of grapes per vine. And a final uncontrollable factor, the cooperation of mother-nature to deliver a growing season of climatic perfection. That season arrived to the Gimblett Gravels Winegrowing District in 2013, yielding what has since been widely heralded as ‘the vintage of a lifetime’.

After hand-picking of the grapes, the next stages entailed what is best described as ‘minimal-intervention winemaking’ and a fine sensitivity to nurturing wines with unique excitement and a distinct sense of place. Says Tim “the winemaking was purposely very hands-off, with minimal disturbance, allowing the wines to fully express their vineyard site and the growing season, to obtain the purest expression possible”.

Fermentation took place in open-top fermenters with gentle hand-plunging, followed by a post-ferment maceration until tannin development and integration were at their optimum. The wine was then aged in 100% new quality oak barrels (100% French for the Cabernet Merlot, 50% French and 50% American for the Syrah) with 20 months of élevage and just one racking throughout.
A rigorous barrel selection was then undertaken before composing the final wines, which were again rested in barrel to gravity-settle over an extended period before bottling in an unfiltered state. 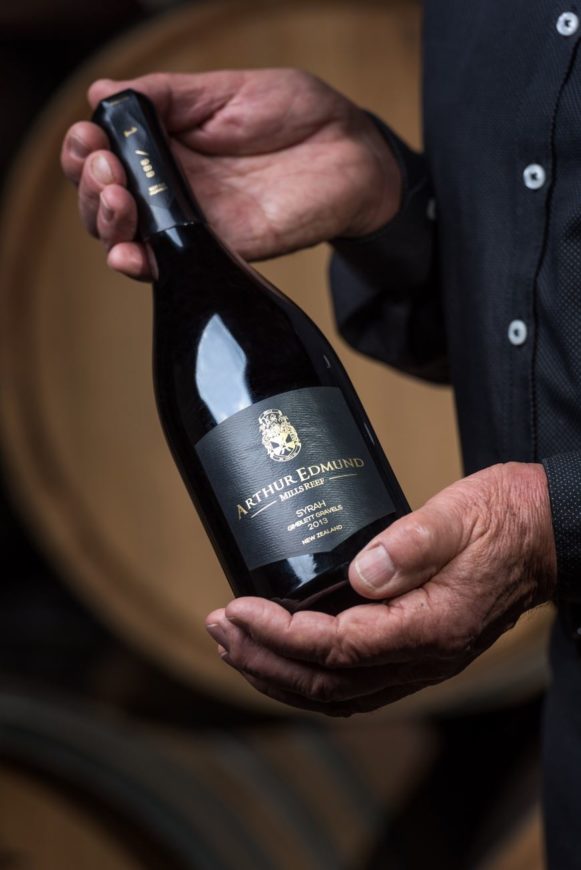 But their journey in the winery wasn’t yet complete, to be finally held in the underground cellar in climate-controlled conditions for a further 3½ years to commence bottle ageing and attainment of ever-greater complexity.

Now, five years on from vintage, the first library tranche of Arthur Edmund wines are ready for release.

As to the timing, Tim says “ageing of wines is a series of rhythmic ‘awake and sleep’ cycles, and from our 30 years of experience we’ve noted those cycles tend toward 8 yearly for Gimblett Gravels red wines, hence this first release is timed to coincide with their rise from slumber and ascent toward the first apogee predicted for 2021.”

He further adds “the time is therefore right for wine lovers to acquire and experience these wines as they make their first ascent, or to further age in private cellars for future discovery and enjoyment”.
Befitting such prestige wines and their rare and collectable nature, only a very limited edition is available, each bottle is wax-dipped and individually numbered, accompanied with a certificate of authenticity, and presented in a boxed collectors set.

The philosophy of these prestige wines from vineyard to bottle follows firmly in the great French concept and tradition of ‘terroir’. Hence as each wine label attests, “these wines are the ultimate handcrafted expression of Mills Reef, reflecting great people, heritage, and vineyard site, gently harnessed to reveal in every bottle”.

The Arthur Edmund wines will be available from the winery and selected fine wine stores nationwide, while stocks last. RRP $350 per bottle.