Forty-two years of being involved in the Marlborough wine industry was recognised on Friday 30 October, when Neal and Judy Ibbotson from Saint Clair Family Estate were acknowledged as the 2020 recipients of the Wine Marlborough Lifetime Achievement Award. 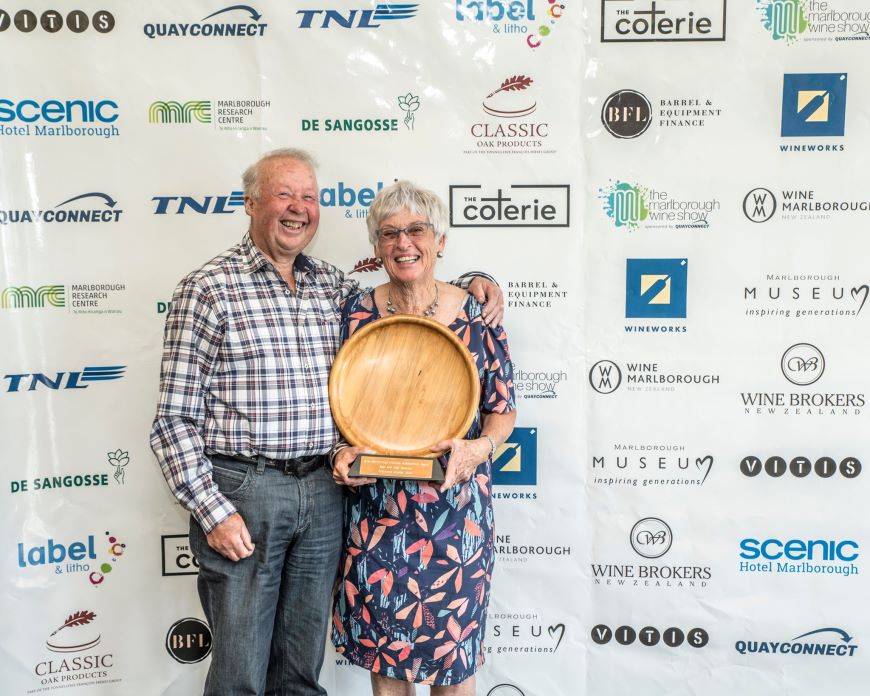 The Award is presented each year to someone the board of the Marlborough Winegrowers Association believe has given extensively to the industry during their lifetime.

Wine Marlborough GM Marcus Pickens says the Ibbotsons have been integral in all aspects of Marlborough’s burgeoning wine industry.

They were one of the first nine property owners to become contract growers for Montana, back in 1978. In 1994 they made the decision to establish their own label, Saint Clair Family Estate and since then the company has grown to be one of the largest private family owned wine companies in New Zealand.

Neal was a farm consultant at the beginning of their move into grapes, expanding into vineyard consultancy. As Judy planted out their original vineyard, Neal became involved in the original Marlborough Grape Growers Association. Both have been long-time supporters of the Marlborough Wine & Food Festival and helped push the diversity of the region’s varietal mix, particularly with the company’s Pioneer Block range, which focused on single vineyard wines.

Mr Pickens says the Ibbotsons have been tireless promoters of Marlborough wine. “They have always placed Marlborough first and Saint Clair second on their international sales trips, and with their attention to quality have helped cement the region’s reputation both domestically and internationally.”

The Lifetime Achievement Award was announced at Celebration Long Lunch, where 17 Trophies were presented to wines entered at this year’s 2020 Marlborough Wine Show, sponsored by QuayConnect.

It wasn’t just the Lifetime Achievement Neal and Judy were celebrating, given Saint Clair Family Estate was awarded four Trophies, including The Coterie Provenance Award recognising the best single vineyard current release wine from any class and the Marlborough Museum Legacy Award honouring wines of the same varietal produced over a 10-year period.