Both Sara and Tom will go on to represent the North Island at the Tonellerie de Mercurey National competition in Auckland, competing against the first and second place winners from the South Island on Wednesday 20th September. 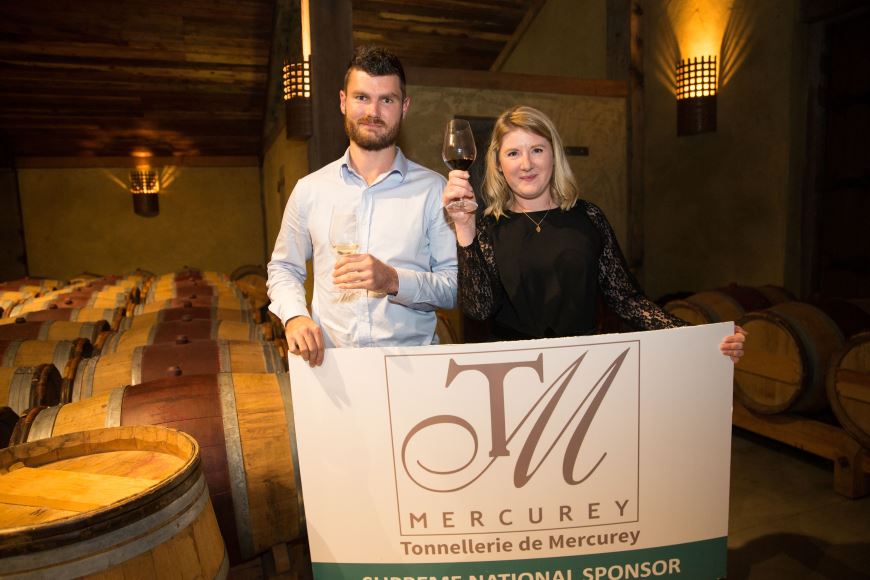 The contestants were put to test at the EIT school of Viticulture and Oenology, across an array of divisions, including wine blending, lab analysis, pitching the blend to a panel of judges, cellar competency, fault finding, public speaking and general wine knowledge. One of the enjoyable and more spectator friendly sections of the day was the Vin Olympics round, where competitors had a number of tasks to achieve in front of a live audience of EIT students, sponsors and friends. This section showcased their skills with spitting long distance (an essential winemaker skill), putting together wine packaging, beer and cheese tasting among other challenging exercises.

The final challenge was a wine options session, held at the event celebration dinner at Church Road on Friday evening. This blind wine tasting was not only for all competitors, but also the guests at the dinner, who tasted four wines without knowing what they were and were put to the test to answer questions on each.

Winner, Sara Addis; works part time at Trinity Hill and is a student at EIT, studying a double graduate diploma in Viticulture and Oenology. Sara has worked a number of vintages, including one at Moet & Chandon, Champagne in 2016 and prior to that was a cellar hand at Cloudy Bay, Marlborough. With a desire to become a winemaker, Sara enrolled at EIT earlier this year.

“I am absolutely over the moon and I still don’t think it’s sunk in that I won! It was a tough day and I was up against some very tough competition. I particularly enjoyed the varied nature of the day which gave me the chance to put all my skills to the test and really prove to myself that I’ve got what it takes to become a winemaker,” she said.

“It is brilliant to see this competition become an annual event. We are such a young winemaking nation and it is important to recognise the next generation of winemakers we have coming through the ranks,” Hannah commented.

“I would like to thank our National Sponsors; Tonellerie de Mercurey, OI, Vintech Pacific, Farmlands and Laffort, along with our Regional Sponsors; Hawkes Bay Wine Co., Viniquip, Staples Rodway, Guala Closures, Charta Packaging, Pan Print, Glyn Rees-Jones Real Estate, Buzz Electric, Farmex and Breezing. Finally a huge thank you to our judges who gave up a day in the winery to be involved with the competition. We would also like to thank all the wineries who donated wines to the dinner event. Without all this generosity, this competition would not be possible”, Hannah continued.