Two Rivers of Marlborough – Two of New Zealand’s No.1 Wines Two Rivers of Marlborough’s owner and winemaker, Dave Clouston, is ecstatic with not only one, but two of his wines, taking out no.1 in Cuisine Magazine’s Dec/Jan issue (on sale on 14th December 2015).

Throughout its 28 years, Cuisine has become a New Zealand household name and it has an international reputation for excellence. Its team of experts have scored the wines as follows: Two Rivers ‘Convergence’ Sauvignon Blanc 2015
No.1 Sauvignon Blanc in New Zealand and 5 stars
‘’This is a thoughtful expression,” noted Jack Glover. “And there’s an energy about the fruit profile that I love.” 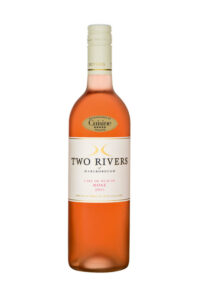 Two Rivers ‘L’ile de Beauté’ Rosé 2015
No.1 Rosé in New Zealand and 5 stars
“Its winning personality comes through in the deceptive depth of the strawberry infused fruit, the well-ordered lightness of its frame and its overall clarity and class.”

“I take Rosé very seriously, aiming for a dry, pure, Pinot Noir Rosé in a Mediterranean style. I was elated to be awarded no.1 in New Zealand for our 2015 vintage,” says Dave Clouston. “And then, to take out no.1 Sauvignon Blanc as well was an amazing result. There was such a fine line up of wines in what are the most competitive categories so I am truly thrilled.”

Dave Clouston established Two Rivers of Marlborough 10 years ago, taking the name from the iconic rivers that feed Marlborough’s Wairau and Awatere Valleys. Dave grew up in Marlborough, and spent his youth in the hills and plains of the Wairau and Awatere rivers, where his family have farmed for 5 generations. Energetic, young and talented, his experience – hard-earned over 25 vintages worldwide – is the driving force behind Two Rivers. Dave aims to capture and emphasise Marlborough’s intense power, while producing complex, elegant wines with a slightly European flair.

Two Rivers wines can be found online, in fine wine stores and top restaurants worldwide and is distributed in New Zealand by Procure www.procureliquor.co.nz.